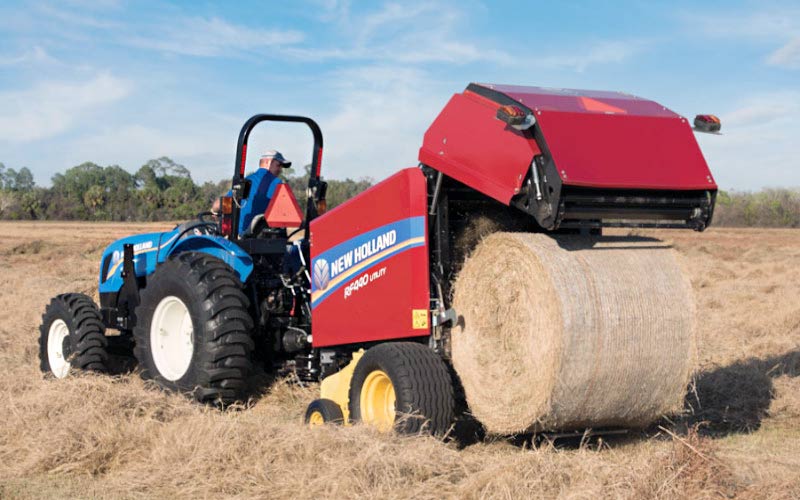 In 1895, a 26-year-old village tradesman named Abe Zimmerman founded New Holland Machine Shop in New Holland, Pennsylvania. The first product designed and produced by the company in 1899 was a portable feed mill, followed by other innovative products to help farmers. Since then, the company has grown and merged with several other agricultural brands: Ford, Fiat Trattori, and Claeys to become one of the most popular brands in the United States and Europe.

Today, the company has introduced stunningly innovative technology to the market. They were one of the first companies to meet new Tier 4A and Tier 4B compliance with their the acclaimed ECOBlue™ selective catalytic reduction (SCR) technology, a solution that enables farmers and contractors to significantly improve their productivity and reduce their fuel bills.

This commitment to innovation and growth has produced some of the most technologically advanced tractors on the market. One of their overriding company initiatives has been it’s Clean Energy Leader strategy, and this has led them in exciting new directions.

As part of New Holland’s dedication to clean energy, last year they announced a new methane-powered concept tractor that offers the same power and durability of a diesel tractor with cleaner fuel and significant fuel cost savings.

The concept New Holland introduces is pretty amazing. What if you could stop using fossil fuels in the future and use an alternative fuel made from crops and agricultural waste? Imagine making your own fuel from the stuff you used to throw away! New Holland has been developing this concept, the self-sustaining farm – since 2009.

I’m not going to pretend I understand the science. They are keeping that hand of cards pretty close to the vest. But it’s easy to understand how this would impact farmers, the environment, and energy independence.

What’s under the hood

The new concept tractor is built on an earlier design, the T6 Methane Power prototype. The latest design has groundbreaking combustion technology engineered specifically for agricultural use and a 6-cylinder methane engine that delivers 180 hp and 740 Nm, power and torque equivalent to a comparable diesel engine.

Even with all that power, the methane engine is much quieter than its diesel counterpart. The noise level is reduced by about 50% – which will make you and your neighbors happier.

The methane engine also runs cleaner, producing at least 10% less CO2 and reducing overall emissions by approximately 80%. And that means you’ll be breathing cleaner air as you work.

Ok, I confess that when I saw “methane engine” and “sustainable farms” my first thought was cow farts. Which isn’t that far off the mark, except that you won’t be fitting your cattle with gas bag diapers.

According to the DOE, about 247 anaerobic digester systems are already in operation at commercial livestock farms in the U.S. Most of them use the biogas to generate electricity, not fuel for vehicles.

Biomethane is made from decomposing materials, usually a mixture of energy crops – grown for this purpose – and waste plant or food material, the latter in both liquid and solid forms.

And yes, the video mentions animal waste. Cow plop is in the mix.

Like composting, it uses an anaerobic process to break down the materials, and this process gives off a gas, which can be converted for energy. It’s renewable and doesn’t require drilling or extraction. And if there’s a spill, you are faced with a big pile of…perfectly usable fertilizer.

In its explanation, New Holland mentions that some waste can be “ gathered at the farm from sources such as food factories, supermarkets and restaurants and canteens.” Table scraps? Used fryer oil? I’m not sure, but the DOE also mentions that biogas is produced naturally by landfills, and hundreds of them are harnessing the gas for electricity.

New Holland’s forward-thinking innovation is way ahead of the pack. Making engines that run on biofuel solves all kinds of world problems, including what to do with mountains of waste including solid waste from wastewater treatment facilities, cleaner air, sustainability, less danger of oil spills, and reduction in dependence on foreign oil.

Case-New Holland is a world leader in agriculture and turf equipment for many reasons. Their tractors are some of the best made and most recognized on the market, and they are always on the leading edge of technology. The commitment to clean energy and sustainable farming is just one more thing to love about Big Blue.