The Fascinating History of the First Tractor Ever Invented

The year was 1892. In a very small village in Clayton county of Northeast Iowa, the very first tractor was created by John Froelich. It had yet to be named the tractor, but it was the first successful gasoline engine that could maneuver forwards and backwards; the most rudimentary functions of modern engines.

Prior to widespread tractor use, farmers relied on steam-powered engines and back-breaking work to thresh wheat. The engines were bulky and very heavy, making them difficult to maneuver, and they frequently set fire to the stubble and grain in the fields. Froelich took a crew of men out to Langford, South Dakota every fall to work on the fields, so he was very familiar with steam engines and their many issues. He was determined to invent a better way to power the engines.

The answer was gasoline. Froelich worked with blacksmith Will Mann to come up with a vertical, one-cylinder engine mounted onto the running gear of the steam engine. After a few weeks of testing, it was time to take his crew back out to the South Dakota fields, where he would try out his new creation in the fields. That fall, Froelich’s crew threshed 72,000 bushels of small grain, making the new equipment a complete success. 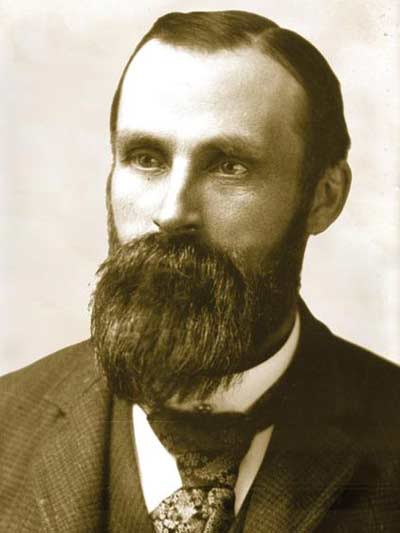 Later that fall, Froelich transported his new invention to Waterloo, Iowa to present to a group of businessmen. The men were so impressed they immediately formed a company to manufacture and produce these engines. The company was named the Waterloo Gasoline Traction Engine Company and Froelich was made president. The new machine was called the “Froelich tractor” after its inventor.

Unfortunately, attempts to sell the tractors were unsuccessful, despite how practical they were. Only two were sold, and both were returned shortly after being sold. The company had to settle with manufacturing stationary gas engines to generate income while new experiments were conducted with the Froelich tractor.

In 1895, the Waterloo Gasoline Engine Company incorporated. Froelich decided to withdraw himself from the company, however, because his interest was in tractors, and not stationary engines.

After years of trying to improve the tractor while building standard engines, the Waterloo company made the “L-A” model in 1913. Then, in 1914, they introduced the first Waterloo Boy Tractor, the single speed “R” model. Farmers liked this model, and they sold 118 of them within the first year. Shortly after, the  “N” model was released, which had two forward speeds. This model was also successful.

Farm prices and demand for dependable mechanical farm power began to rise during World War I, making the tractor an incredibly popular concept. Within months, multiple tractor manufacturers began to pop up. Deere and Company in Moline, Illinois, a manufacturer of John Deere equipment, had been keeping a close eye on the progress, improving quality of products, and success of the Waterloo Company. John Deere was searching for an established tractor to complete its line of farm equipment. They decided that the Waterloo Company knew what farmers wanted and how to build a quality tractor.

Over the intervening century of experiment and trial, John Froelich’s humble invention has improved greatly, and today, the John Deere Waterloo Works is still one of the largest tractor producing plants in the nation. Every day, descendants of the original Waterloo Boy, tractors of all sizes and types, are sold to farmers all over the world. These tractors make farming easier and more profitable.

If you visit the John Deere Tractor & Engine Museum in Waterloo, you can see more than 100 years of history on display, including an original Waterloo Boy.

The small 1890s village is now known as Froelich, Iowa and boasts the name of “Tractor Town, U.S.A.”, in honor of the tractor’s creator. There is a museum where you can find a scale model of the original Froelich Tractor, that was built based off of the authentic blueprints, which you can find on display. They also hold an annual celebration the last weekend of September, called “Fall-der-all”, where tractors from the very first Froelich to the newest John Deere, are displayed.