What Happened to Those Blue Ford Tractors? 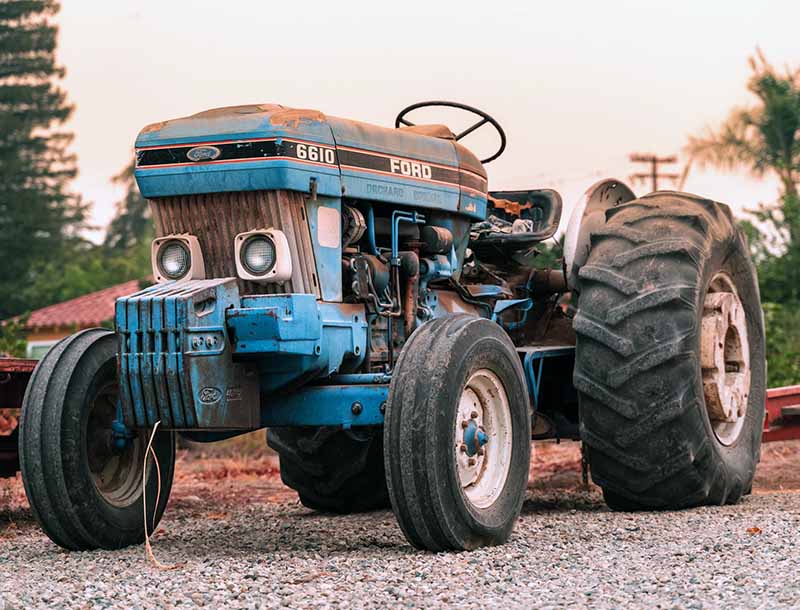 What ever happened to the old blue Ford tractor? The short answer is they are still here right in front of our farming faces. Today we call those blue Ford tractors by a different name – New Holland. Here’s the history.

Everything evolves, and so have the Ford blue tractors. Their first evolution was from gray with a red belly to the blue we know today. Ford began making tractors in 1917. As the first company to mass-produce tractors, Ford brought the tractor to the small farmer, and essentially starting the agriculture equipment industry we see today. [2] 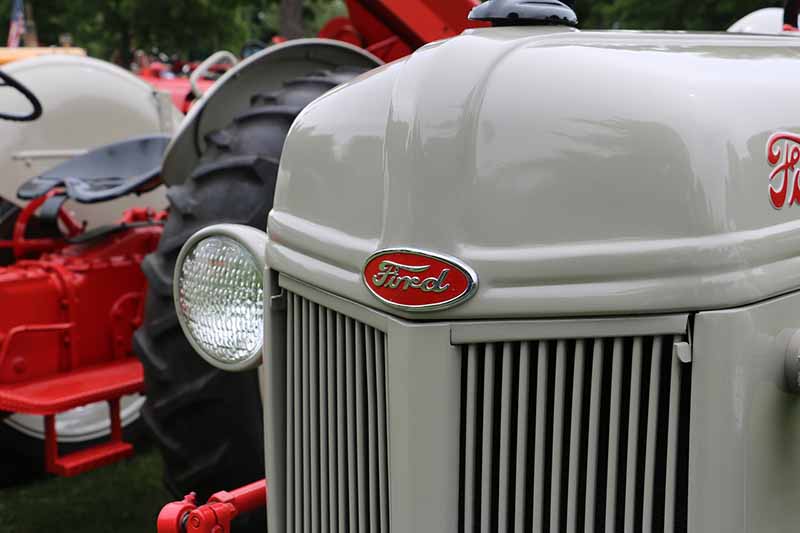 The History of Blue Ford Tractors

The antique blue Ford Tractor that we know, and love did not become Ford blue until 1964 [3]. Ford would grow and acquire New Holland in 1986 [4]. At that time, New Holland was a hay, forge, and combine company. New Holland was already established as a quality brand for hay production, making a perfect pairing with the Ford Tractor blue series. Even in the 1970s, New Holland was ahead of the game. They introduced the first twin rotary combine. The merge of Ford and New Holland created a company ranked as the third-largest producer of farm equipment globally.

In 1991, Ford turned its attention to Ford car and truck manufacturing and sold its tractor and farm equipment company to Fiat. We know all about the Fiat cars but may not know that Fiat is tractor manufacture dating back to 1919. They became part of the US Tractor and equipment marketplace in the 1970s and sold under the brand of Hesston. When Fiat bought Ford-New Holland, it sold the Hesston brand, and in 1996 the Ford-New Holland Brand became New Holland. The Ford tractor blue paint scheme stuck, and that is why today, New Holland Tractors are still Ford Blue. [2]

Why did Ford change from gray-colored tractors to blue tractors? 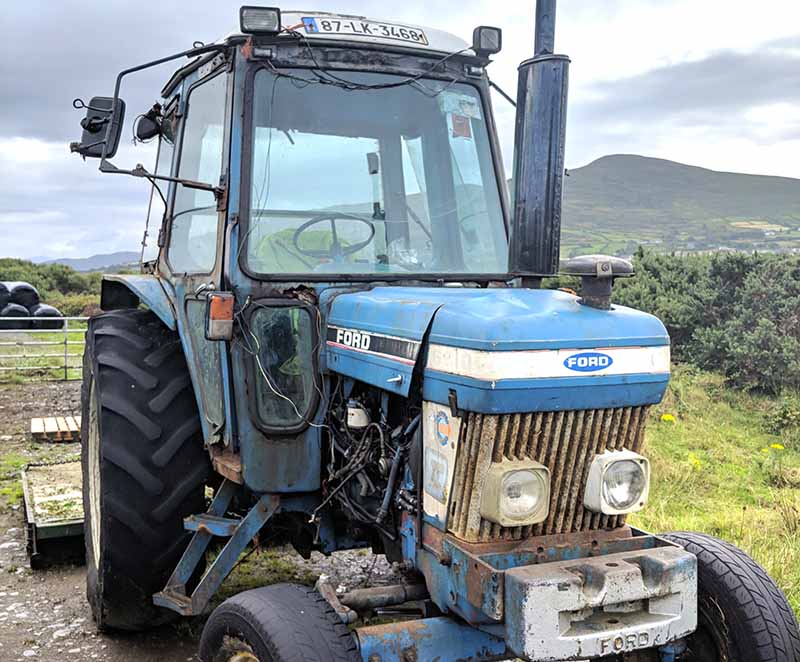 This one is still in the game but could use some new tires, though 🙂

The advancement of Ford technology in 1964 meant they would offer a 4-cylinder 2000 and 4000 series tractors. You could say this is one of the earlier examples of branding. Ford Blue meant that their tractors were recognizable from the road, and working farm equipment was an easy way to show how many of your tractors local farmers worked.

The Ford 9N was in production from 1939-1952 and was a dark gray upper with a bright red chassis. The Ford 2N is the result of the revision of the N9 tractor. It appeared in 1942 as an all-gray tractor. Many of the changes to the 2N were the result of the impact of World War II on manufacturing. For example, during the war, all manufactured batteries were held for the US Military. As a result, the 2N tractor did not have a battery and instead had a hand crank for a starter. The 8N, which began in 1947 and offered a 4-speed transmission and increased functional HP, both for PTO and drawbar power, became the successful version of the 9N and 2N. The 8N platform went on to become the most sold tractor in North America. [2]

How Did New Holland Build on The Ford Brand?

New Holland was already an innovator when Ford purchased them. When Fiat purchased Ford-New Holland, it also had a remarkable history. Ford started selling tractors in 1917 and Fiat in 1919. The tradition of what Ford built was not difficult to continue. It centered a constant improvement as new technology emerged. That innovation started right in the field, which is where Ford learned what a tractor needed to do. 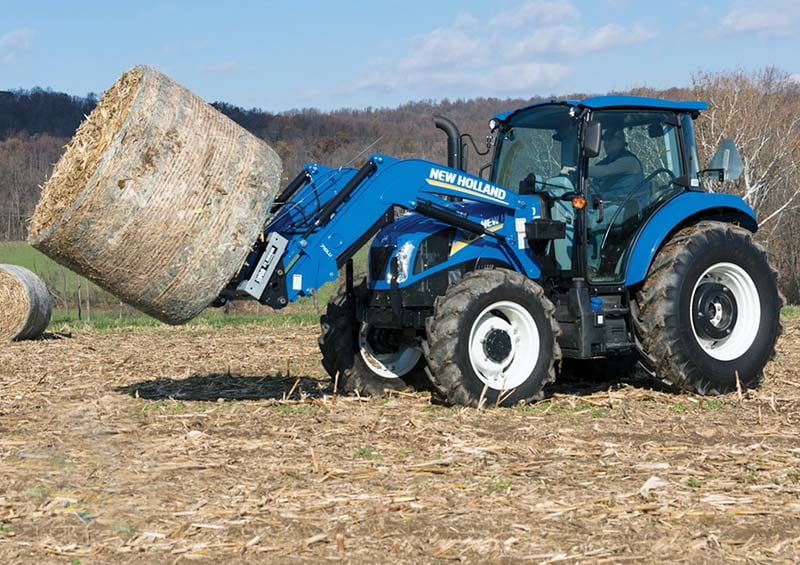 New Hollands’ drive before and after their purchase by Ford and later by Fiat has remained incredibly close to the ideal of Ford tractors. Ford began in the fields working with farmers to make improvements that allowed small farms to complete the most work in the least amount of time. New Holland is still in the field, working side by side with farmers to develop innovations that continue to make farming profitable, more accessible, safer, and smarter.

How do they improve on the Ford tractor?

Technology and innovation are two tools that, when used correctly, will naturally make improvements. However, the real reason that Ford and New Holland tractors are incredibly popular is that they listen to the farming community way back in the day and also for today.

Are the New Holland tractors as good as Ford?

It is a personal opinion, but New Holland is Ford. Both companies are incredibly similar, and under the guidance of Fiat, you gather together the Ford traditions and commitments to farming, with the innovation of New Holland and the technology of Fiat. The trifecta is a win-win, and the New Holland tractors are every bit the quality and value that was the Ford tractor.

How Did Those Blue Ford Tractors Come to Be?

There are a lot of arguments on the web about why Ford chose to go blue. They all point at two things. First, the introduction of the 1000 series was a step-up in technology. Second, Ford wanted the new tractor to stand out from the crowd. Their biggest competition was from Farmall, whose tractors were bright red. The striking blue color that Ford chose stood out and marked a technological advancement, which everyone wanted so much that farmers and tractor dealers began to paint other brands of tractors blue.

Ford no longer makes tractors. The decision to focus on building cars and trucks was an incredibly successful move on Ford’s part. In 2020, Ford Motor Company reported annual sales and revenue of $127 Billion. [1]